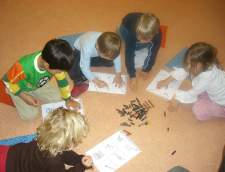 About the ABRAKADABRA Spielsprachschule Berlin: The children's language school Berlin was founded in 2001 and is a market leader in the field of early language acquisition in Berlin. It is primarily children aged 3 to 12 that learn at our school. We are presently represented in over 140 institutions. Throughout the school year our mobile play instructors come to kindergardens, elementary schools and private householde where they offer playful group and one on one classes for children in German, English, Spanish and French. In our centrally located premises at Bundesplatz we can offer you a wide choice of courses on weekdays, in the afternoons or on Saturday mornings. The rooms have been especially arranged to meet the needs of children. It is possible to enter a course in progress at any time. Further locations are situated all over Berlin. German and English Daycamps in Berlin: During the school holidays we are offering exciting daycamps for children ages 4-12 years in Berlin. For the children its a joyful journey in a new world, far away from the stresses of everyday life. In fact, its loads of fun here with us! We are excited to report more than 98,2% customer satisfaction in 2019! About our ABRAKADABRA method: From the time of its birth every child has acquired the natural abilities to learn a language. They can imitate the sounds they hear, then understand words and later form sentences before finally mastering the language fully. These skills can also be tapped for a second or third language which then penetrates, like the mother tongue, via another section of the brain into much deeper layers than an additional language learnt in later years. There is a good early language learning possibility which has proved its worth in Canada for the past thirty years. In this so-called immersion method children are thrown into a language bath where they first splash around and then start swimming with pleasure. A language is learnt by moving around in that language, by living in it. It has been scientifically proven that different areas of the brain are activated when small children and adults are learning. When children learn languages, the same part of the brain is involved as when they learn their mother tongue. However, according to the principle of Total Physical Response it is considerably easier for them to learn a further language in conjunction with the perception of all senses. In the children's language school we avoid artificial communication as in conventional language lessons. Language is taught without any classical textbooks. Children play in whatever language they are learning. Our children enter a new language world playfully and effortlessly and without being overtaxed learn a foreign language with all their senses seemingly quite involuntarily.

A review of the Cooking and German language in home stay. Over all I would give the experience a 3 out of 10. None of that reflects on the instructor or the premises. Most of the low scores lay at the feet of Language International. We... more

Most teachers were really good and made the lessons interesting. Classes were very mixed which meant we were all forced to speak german which was really good practice. It is very central and the accommodation provided was excellent. Some of the... more

What type of French course are you looking for?

Whether you are a student, a business professional, or a traveler, there is a language course in Berlin that is right for you. There are French courses available for all fluency levels, ages and time durations. Just select a course type from the list below to get started.

View all French courses in Berlin »

Junior French courses are for children ages 8 to 12 and teenagers ages 13 to 18 who want to study French. 4 - 8 week courses available in the summer from June to August. 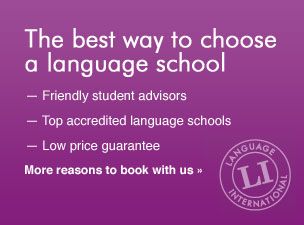